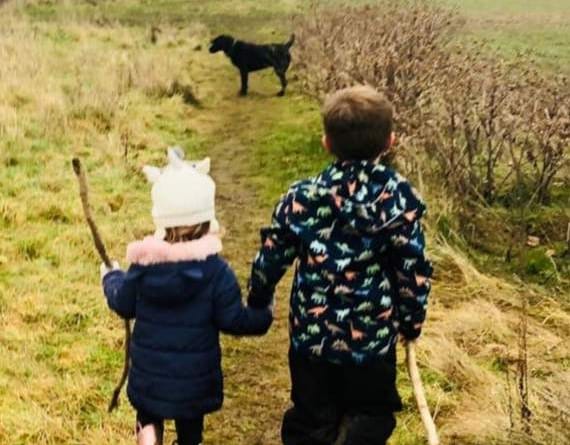 Elizabeth and Jozef Ryllo walking with their dog Pemba

Two young children are covering thirty miles through September to raise money for the mountain rescue team which includes their grandfather.

Jozef Ryllo, 6, and Elizabeth Ryllo, 3, set themselves the challenge of walking, running and cycling 30 miles for Brecon Mountain Rescue Team in September.

The brother and sister, who live in the Cotswolds have so far raised a third of their £300 target.

Proud Grandad Martin Gregory said: “Both of my grandchildren love walking in the countryside near their home with their family dog Pemba, a black labrador.

“They walk several mils a day whenever they can and in all weathers and so they are very likely to exceed their 30 mile target for September.”

Martin has volunteered with Brecon MRT for 30 years, and is still active in the team’s rescue operations - he explained that the childrens’ mother Rachel is from Brecon and used to attend Brecon High School before she got married and moved to Gloucestershire.

He said: “I have been a member of Brecon MRT for 30 years, and I am still active in searches and rescues and I’m also involved in team fundraising.

“Brecon MRT is a registered charity and relies entirely on fundraising to raise its annual running costs of £55,000, so fundraising by young supporters like Jozef and Elizabeth is invaluable to the team.”

The siblings have raised £100 so far at the time of going to print and they are still accepting donations via their Just Giving page which has been set up by their mother Rachel.

The page says: “We will be attempting to walk, run and cycle for Brecon Mountain Rescue Team because they have missed out on fundraising this year.

“This is a cause very close to the Ryllo family’s hearts as Grandad has been heavily involved in the Brecon Mountain Rescue Team for over 20 years.”

Brecon MRT relies on fundraising from the public - especially after the last 18 months when they have not been able to host their usual fundraising events due to the pandemic.

With around 100 callouts per yer and each callout costing an average of £550, the voluntary team’s annual running cost is around £55,000 including for their equipment and fuel.