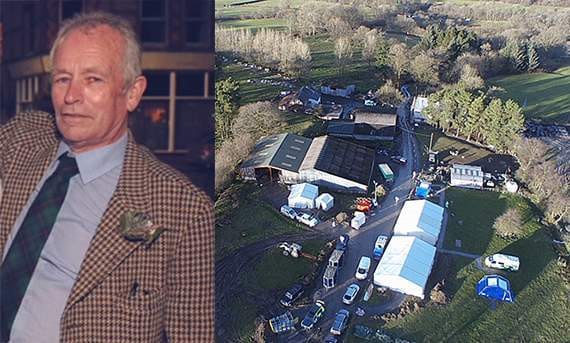 Police have confirmed the names of three children who died in a house fire in Llangammarch Wells on October 30.

The bodies of boys Just Raine, 11, and Reef Raine, who was 10, and a girl, nine-year-old Misty Raine, have been identified.

But police said they have yet to recover the body of one child from the farmhouse and they have not yet been able to identify the body of another child that has been recovered.

Police also confirmed they have recovered the body of David Cuthbertson who was 68. They said all the victims are from the same family unit.

The information was released at a press conference in Cardiff Bay today when officers again said they are treating the cause of the fire as unexplained.

The coroner won't open an inquest until all of the dead have been identified. DNA testing has been used to identify the bodies recovered.

The senior identification manager in the case, South Wales Police Chief Superintendent Tony Brown, said the work had been "difficult" but the priority had been to keep the surviving members of the family informed of developments. He said: “Our focus has been and continues to be the family who are having to go through the most horrendous of ordeals. We have been supporting them throughout, and continue to update them with any developments.

“Sadly, I can now confirm what was feared from the beginning - we have recovered the remains of five bodies and have been able to identify four of those at this time. They are David Cuthbertson, 68, boys Just Raine, 11, and Reef Raine, 10, and 9 year old girl Misty Raine.

“We were working on the hypothesis that 5 children were unaccounted for following the fire, therefore work will continue to recover the remains of another body. Our hearts go out to the family, and our thoughts and prayers are with them.”

On the challenges faced at the scene, Chief Supt Brown said: “The nature of this fire was extremely intense and destructive and it has presented us with significant difficulties as we work tirelessly to assess the scene and recover remains which is why it is taking a considerable time.

“During these past weeks we have been faced with the difficult task of taking down the outer walls of the house - 260 tonnes of bricks and mortar – brick by brick, by hand. Only once this was finished, could we section-off the inside of the house and begin the delicate fingertip search for remains.

“Specialist scientists have been with us at the scene to assess what we have found, and we have taken great care to ensure that this process maintains the utmost respect for the deceased and the bereaved. It has obviously been difficult and challenging in a number of ways for everybody involved and this work is likely to continue for another couple of weeks. Our commitment to this work will not falter.

“My role in this investigation has been to preserve the integrity of the evidence at the scene, all the while making sure the process is sympathetic and caring for both the deceased and bereaved. Our thoughts are firmly with the family.”

“This investigation is very much ongoing and we continue to treat the cause of the fire as unexplained at this stage. We are determined to do all we can to understand what happened and how these individuals came to lose their lives.

“The assistance provided by a team of officers from South Wales Police and Gwent Police has been invaluable as they have provided their specialist knowledge and skills in recovering the remains.

“The family have asked me to re-emphasise that they wish to be left alone to grieve at this very difficult time. They are extremely grateful for the continuing support shown to them by the local and wider community."