Retiring mayor says thank you at end of a busy year 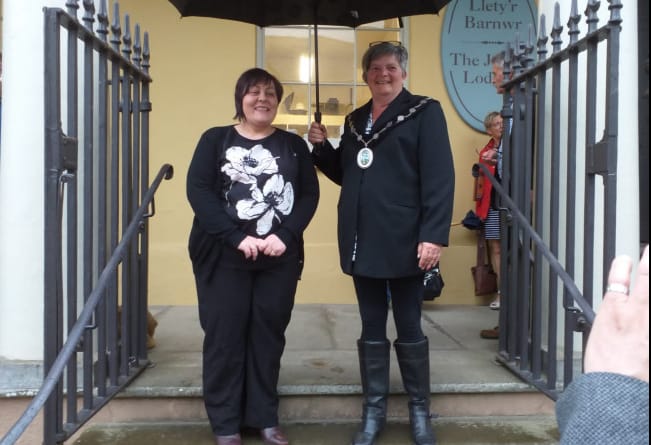 The outgoing Mayor of Presteigne has paid tribute to all those who have worked so hard on projects in the town over the past year.

Handing over to the new mayor Coucillor Deb Edwards of Norton, retiring mayor Councillor Fiona Preece said she hoped the covid pandemic was now coming to an end.

“The last year has seen a gradual return to almost normal for residents and businesses alike and I am sure we all hope that the covid pandemic is now behind us,” said Councillor Preece.

“The council continued to work throughout the pandemic but the easing of restrictions has meant that we have returned to physical meetings combined with online streaming – a process not without its problems but I think everyone has appreciated being able to meet face to face and being able to discuss matters in more detail.”

These have included the extension to the cemetery which after a long wait has finally opened, alobg with a new carpark.

“Thanks to all involved especially county councillor Beverley Baynham for all her hard work, Colin Kirkby and John Wilding and officers at Powys County Council,” said Councillor Preece.

“During the year the town council applied for and received a grant for the play park at Lugg View Play area and this has now been completed,” said Coucillor Preece.

“The Climate Action group has been really busy this year with the help of the Tree Group organising events such as the very successful Tree Weekend last October and the lovely Tree and Cake event on the Warden a few weeks ago,” she said.

Work is contining on the Dark Skies Project and the full application will hopefully submitted at the end of the Summer with the new town Wifi will also soon be installed.

“The town benches have now all been refurbished or replaced recently thanks to the very generous financial support from a former Mayor, John Kendall and thanks is due to him for his kindness in doing this,” said Councillor Preece

“The biggest achievement this past year is of course the successful grant application to make a new Woodland Nature reserve in Presteigne that will become part of the National Forest of Wales and I would just like to say well done to everyone involved, particularly Councillor. Rose Bamford, for all the work they put in preparing the application. Work on the project is now getting underway.,” she said.

Councillor Preece also thaned the contractors working for the council and without whom the Council would struggle to run its services.

In August last year, as the Mayor’s fundraiser, I did a fundraising walk along the Offa Dyke path from Hay on wye  to Knighton raising £1,200 which was spilt between East Radnor Day Centre and Presteigne 1st Responders.

“Thank you to my family for their support and also everyone who sponsored me.

“I would like to wish the next Mayor all the best of luck for the year ahead.

“Finally I would like to thank you all for your support for me in my term of office.  I have felt very privileged to represent such a special place,” she said.