Brecon see off challenge from rivals to reach Plate semi-finals 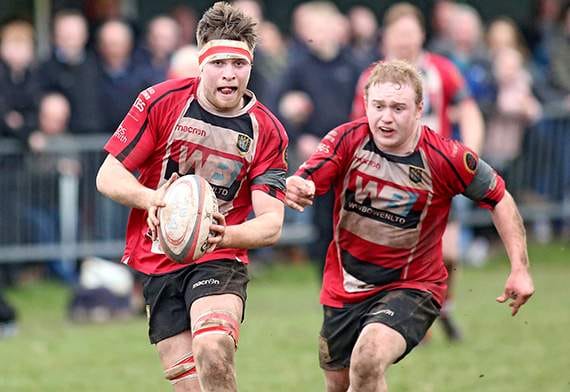 TAKING a break from league action, Brecon travelled to Nelson to compete in the quarter final of the WRU Plate After 10 minutes and slightly against the run of play the home team were first on the scoreboard. Right wing Alex Edmunds showed great pace on the outside to break out of his own half and threatened to make it all the way to the line. Brecon full back Eifion Jones pulled off a great tackle to halt the move but Nelson earned a penalty which outside half Ross Jones converted.

Brecon hit back immediately. Jon James set off on a barnstorming run from the kick off and at the following scrum Brecon’s marginal superiority earned them a penalty. Dean Gunter kicked the ball into touch on the home 22 and Ioan Edwards soared high to win good ball. The ball was moved into midfield and Cameron Gardner made a great clean break towards the posts. Cover arrived but he had the strength to cross the line. Gunter had no problems with the conversion.

Almost immediately Brecon extended their lead. An attack down the left flank gave Jake Crockett some space. He put in a beautifully weighted chip and won the race to the ball. He hacked on over the line and completed the score under the posts. Gunter again converted.

With two quick scores under their belts it would have been easy to believe the game would flow fairly comfortably in favour of the visitors. But Nelson quickly dispelled that notion.

Before half time Nelson delivered a double riposte. The first came as a result of good creative play which opened up the Brecon defence. Centre Alec Jones made the first break through midfield on half way. He was halted on the Brecon 22 but Nelson kept the ball alive through a number of phases and finally prop Zac Pearce burst through for a try. They followed that up with a Ross Jones penalty to reduce Brecon’s lead to three points.

Brecon looked to hit back before half time but in spite of some good build-up play, which again featured Gardner, they failed to cross the line and at half time the game was in the balance.

Brecon started the second half far better than the home side. Scrum half Geraint Workman took a quick tap penalty inside his half and a flowing move, in which Dafydd Edwards featured with a weaving run, should have resulted in a try as Crockett and Lewys Cooke just failed to combine and complete the move. It wasn’t long, however, before Brecon made amends with a beautifully constructed try. Eifion Jones, who had moved into the centre after injury to Sam Campbell, cut through. Jake Crockett came off his wing in support and cut a beautiful line towards the posts. His second try gave Gunter no problem with the conversion. Brecon extended their lead with a Gunter penalty and for a second time in the match they appeared to be pulling away. Also for a second time that idea was quickly dispelled. Brecon failed to control the ball from the kick off and Nelson earned a scrum on five metres. Powerful No 8 Jarred Walters broke and scored. The game now swept from one end to the other with both sides having the opportunity to score but failing to complete until Craig Wilson struck a penalty to cut Nelson’s deficit to five points.

With 15 minutes to go, Walters broke from a scrum five. He was tackled by Workman and Brecon captain Ewan Williams brilliantly won a penalty as he forced Walters to hold on. From there Brecon finished strongly. Ryan James made a great run and Eifion Jones kicked well for the corner. Nelson had the put in to the line out on their five metre line but were under pressure. Ewan Williams competed effectively and the ball was knocked down into the hands of veteran Brecon hooker Alan Taylor who planted the ball over the line. Gunter’s conversion from wide out added the icing to the cake. The semi-final will be played on March 30.