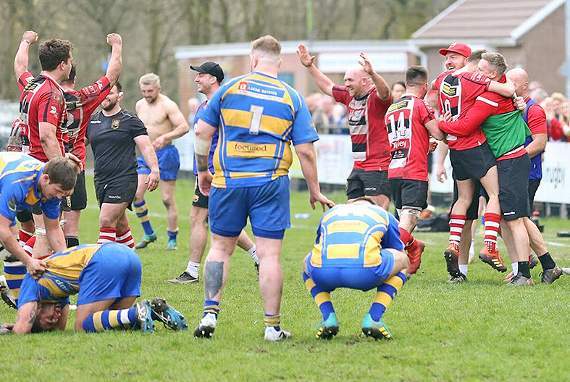 BRECON RFC were given the weekend off as opponents Cwmbran were unable to raise a side and saw their closest rivals Penallta lose to Hartridge who had been bottom of the table.

Bizarrely despite Penallta’s shock 31-33 defeat at home their losing bonus point meant they reduced Brecon’s lead at the top of the table to eight points.

Saturday’s defeat to Newport-based Hartridge, who have enjoyed a meteoric rise through the WRU divisions but have found life tough in Division One, was Penallta’s second consecutive home loss of they were defeated by Brecon in midweek. Andy Powell’s men had already defeated Penallta in the semi-final of the WRU plate and their trip to the artificial 3G pitch at Ystrad Mynach was the first of two league matches between the top two before the end of the season.

Injuries to key personnel meant some reshuffling had to be done and Brecon faced some early pressure against the well supported home side who started strongly as they sought revenge for their semi-final defeat knowing a bonus point win would draw them level in the league.

Certainly Penallta started with all guns blazing. Some of the physicality did seem to overstep what was acceptable. Brecon battled hard but as the half progressed they fell behind on the score-board. A converted try and a penalty gave Penallta a 10 point half time lead.

At the start of the second half Brecon frustrated their opponents and gradually began to gain control as the Penallta team became ill disciplined. Nobody, however, could have been prepared for what was to follow. With Penallta seeming to be more concerned with physically intimidating their opponents Brecon focused on what they do the best, they played 15 man rugby.

The tide turned in their favour and they capitalised scoring four tries featuring Ryan James, Owen Morgan, Tudor Roderick and Jake Crockett and Dean Gunter added two penalties. Penallta’s only response was a penalty while two of their players were sent from the field by the referee, one with a red and the other with a yellow card.

When the final whistle went Brecon celebrated their win with a bonus point to give them a ten point league advantage.

Cwmbran, pulled out of Saturday’s fixture with only 10 fit players and with Penallta playing bottom side Hartridge it was assumed the advantage would be cut to five. Brecon now need eight points from their remaining four games to secure the title.