Brecon’s minds on Plate final in narrowest of defeats 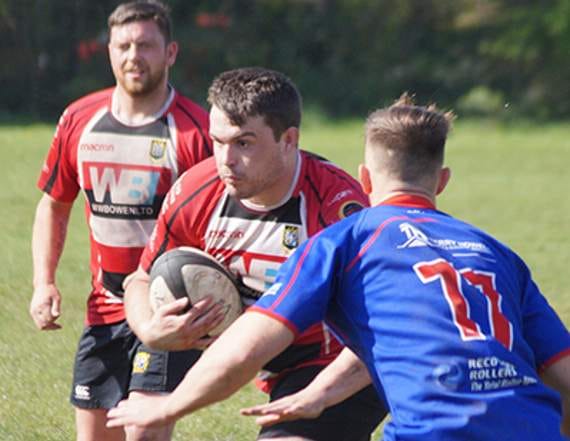 A TRIP to Pontypool a week before Brecon’s debut at the Principality Stadium in the final of the WRU Plate competition was never going to be an easy task.

In spite of all the talk on the surface about focussing on the game in hand rather than what is to come next week, in the back of everyone’s mind was the showcase final at the Principality Stadium. Pontypool United also presented a major challenge.

In perfect conditions the large crowd wasn’t disappointed with both sides attempting to use the width of the pitch as they served up a match in which nine tries were scored with the final deciding score coming with the final play of the day. From a Brecon perspective it was disappointing that they ended up on the wrong side of a narrow one point defeat which finally ended their 100% league record after a run of 18 straight wins.

While Pontypool must take credit for the way that they played and the desire that they showed it has to be said that Brecon also contributed towards their defeat. They started slowly and gave away an early score. Then in both halves they gave away a soft try. To further compound matters they took a four point lead with minutes to go. When their now dominant scrum earned a penalty which was put into touch on half way they seemed to have battled their way to a winning position with the clock about to turn red.

However, they lost control of the ball at the line out and gave away a penalty. That was kicked to the corner and three penalties later Pontypool’s efforts were rewarded when they drove over the line for the winning score.

Whether Brecon were fully focussed on the match at the start is hard to determine but whatever the reason they were certainly sloppy. They failed to take the kick off cleanly and then had a clearing kick charged down. They regained possession and tried to run out of defence but lost the ball and allowed Pontypool an early score.

When Brecon hit back immediately with an excellent try it seemed that concentration was fully restored. Ioan Edwards made a great run and then some lovely handling in mid-field allowed Tudor Roderick to put Dafydd Edwards clear for a try which Dean Gunter converted.

Having settled somewhat Brecon took control of the game. Davey Herdman was held up close to the line and after a great Will Prosser break a try was squandered as the scoring pass was dropped.

Ryan Price looked dangerous on the right wing and Andy Nicholl got close before Gunter extended the lead with a penalty.

Brecon quickly returned to the attack and looked dangerous as Ryan Williams peeled off at the back of a line out. With the ball in the home 22, Brecon then committed an act of utter stupidity. An insignificant confrontation arose and was over almost before it had started, only for a Brecon player to throw the ball at an opponent.

The referee awarded a penalty and the Pontypool scrum half spotted that the Brecon team had not realigned. He took a quick tap and moved the ball wide into open spaces. Ryan Price made a huge effort to cover back and made a great tackle but with lots of support Pontypool completed the move under the posts to take the lead as the conversion was added.

It took a very clever piece of play to finally do that. Dean Gunter spotted that the defensive line was very flat and on half way he put in a lovely chip over the defence. He gathered himself and off loaded to Owen Morgan who sped away for a try under the posts. Gunter converted.

Brecon should have taken a five point lead into half time but they made a hash of gathering the kick off, surrendered a penalty and Pontypool closed to within two as they entered the half time break.

The second half started as did the first, with Pontypool registering on the scoreboard first.

An attempted steal at a line out resulted in a misdirected tap which Pontypool pounced on.

From there they tested the Brecon defence and Brecon tried, not for the first time to run out but the ball was dropped and Pontypool pounced to gather, score and take the lead.

Again Brecon hit back. Ryan Price almost got over in the corner and then hooker Ryan Williams made a great break through mid-field but lost the ball when a try seemed likely. However the pressure told and a great period of continuity was rewarded when Ioan Edwards showed lovely hands to put Eifion Jones in for a try. Pontypool quickly restored their lead with a penalty and Brecon returned the compliment when a scoring pass was deliberately knocked on. Gunter scored from the penalty and with Pontypool reduced to 14 the game seemed to be flowing Brecon’s way.

Almost immediately back on the attack they looked to extend their lead instead the reverse happened. A blind pop up pass in the home 22 was intercepted and the Pontypool wing ran the length of the field to score.

For the fourth time Brecon hit back. Ewan Williams and Jonathon James, who had both joined the fray off the bench, carried aggressively and eventually Dafydd Edwards was put over for his second try. Gunter converted brilliantly from the touch line to give Brecon a four point lead with little time remaining.

The rest was history as the pumped up Pontypool team claimed the decisive score. Much to Brecon’s relief the afternoon was not a total disaster. All players on the park emerged unscathed. They also claimed two league bonus points and as nearest rivals, Penallta lost without claiming a point it leaves Brecon needing just two more league points from their remaining three games to claim the league title and move into the promotion play-offs against Glamorgan Wanderers.

n SWANSEA side Bonymaen will face Brecon in the WRU Plate final at the Principality Stadium on Sunday, April 28.

Like Brecon their opponents have been enjoying an impressive league campaign but suffered a defeat in their last fixture before Saturday’s outing to Cardiff. Their 21-14 loss at lowly Maesteg Celtic has left them in second place in Division One West Central and confirmed Ystalyfera as division champions.

However it means Bonymaen, who are expecting around 350 to 400 supporters to follow them to the home of Welsh rugby, are able to focus on their big day out.

In the league Bonymaen have won 15 of 20 games all season and suffered four defeats and one draw while Brecon had been undefeated before Saturday’s loss at Pontypool United.

Bonymaen’s run in the plate has seen them record victories over division one Aberystwyth and tough Rhondda sides Cambrian Welfare and Treorchy in the semi-final.

Before Bonymaen and Brecon take to the famous turf in their 3.15pm kick-off Abergavenny and Oakdale will contest the Bowl final and the showpiece national cup final will see Cardiff attempt to win their first final since 1997 against defending champions Merthyr.