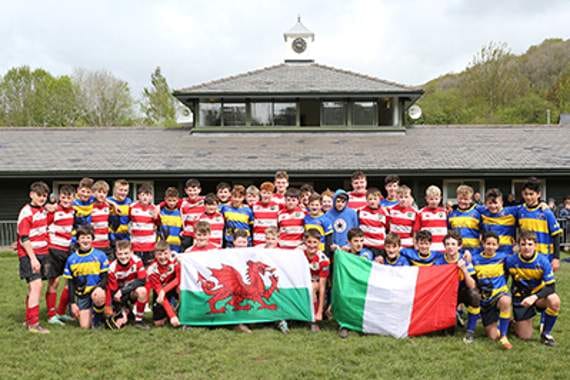 JUNIOR rugby players from Italy have visited Brecon Rugby Club to celebrate an exchange between their two clubs that is now in its tenth year.

The under 14s side from ASD Rugby Belluno in Northern Italy were hosted by members of Brecon RFC’s mini and juniors section and their families. The exchange included a challenge match between the two clubs’ under 14’s sides on Saturday, April 27 which Brecon won 40 points to 12 in the game played on the first team pitch at Parc De Pugh. The exchange coincided with Brecon’s senior team’s WRU Plate Final which meant the tourists were also able to enjoy a visit to the Principality Stadium to cheer on their hosts to victory over Bonymaen in Cardiff the following day. Brecon RFC’s 15 and 16-year-olds had enjoyed a successful tour to Belluno last season.

Alan Taylor, chairman of the Brecon Mini and Juniors section, said: “This year is the 10th anniversary of links between Brecon and our good friends from ASD Rugby Belluno. A fantastic weekend was had by all and Brecon RFC under 15s and 16s are looking forward to the return trip next Easter.”