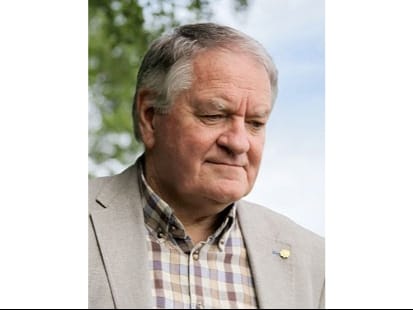 A patriotic Welsh folk song is enjoying a resurgence in popularity after Wales qualified for the 2022 World Cup earlier month.

Yma o Hyd, released by Welsh singer and nationalist politician Dafydd Iwan, was heard ringing around the Cardiff City Stadium on June 5 as Wales beat Ukraine 1-0 to end their 64-year World Cup wait. The iconic folk singer looked emotional as the rain lashed down and the players and some 33,000 fans joined him to sing in chorus and celebration.

Dafydd Iwan was born in Brynamman, Carmarthenshire, on the edge of the Brecon Beacons National Park. Now 78, Iwan has enjoyed a long and varied career as both singer/songwriter and political campaigner

Yma o Hyd (meaning ‘Still Here’) was written in 1981 and released in 1983, and celebrates the survival of Welsh culture and language,

The song has been a mainstay at Wrexham AFC and Scarletts sports matches for some time, but the recent success of the men’s national team has propelled its popularity to a national audience.

Come November at this year’s World Cup in Qatar, the song will undoubtedly be sung from the rafters - adopted as an unofficial anthem for the squad - as Rob Page’s men look to navigate their way out of their group.

As well as a number of fans seeking out Yma O Hyd tattoos and artwork displaying the song’s title selling like hot cakes, the song has seen an influx of online streams in recent weeks.

After a strong social media campaign, fans managed to get the song to the number one spot on the UK iTunes Charts for a short time last Wednesday evening.

Despite this impressive feat, Yma O Hyd did not appear on the weekly chart published each Friday by the Official Charts Company.