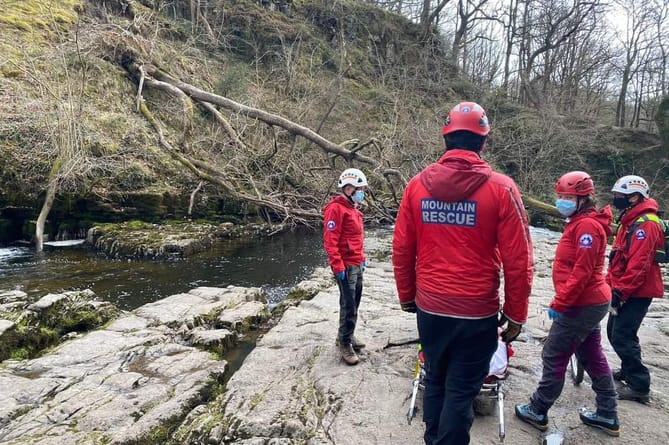 A walker suffered a suspected broken leg when she slipped while visiting a waterfall near Ystradfellte.

Mountain rescuers went to the woman’s aid after she slipped on the rocks at the Clun Gwyn waterfall.

The voluntary Central Beacons Mountain Rescue Team attended the woman on Friday, April 8, along with Dyfed-Powys Police and the Welsh Ambulance Service.

A helicopter also attended as the rescuers were initially concerned the woman, who was supported by a member of the South and Mid Wales Cave Rescue Team while waiting for the rescue team to arrive, would need to be airlifted from the site.

A Central Beacons MRT spokesperson said: “Initial indications from the information fed back suggested a nasty and significant break so we also gave the heads up to and requested the support of the Maritime and Coastguard Agency rescue helicopter from St Athan.

“Initial attendance by the first MR team Casualty Carers on scene were able to receive a very good briefing on the casualties condition from a member of the South & Mid Wales Cave Rescue Team who happened to be in the area and provided support to the casualty and her colleagues pending our arrival.”

Following a further medical assessment, the mountain rescue volunteers and paramedics agreed with the helicopter’s winch-man paramedic that the woman was able to be transported by ambulance.

The incredible team stretchered from the site and took her to the roadside to a waiting ambulance so she could be transferred to hospital.

The spokesperson said: “Further medical assessment, supported by the arrival of the WAST paramedics and discussions with the helicopter’s winch-man paramedic concluded evacuation by air was not necessary and the casualty was loaded onto a mountain rescue stretcher and extracted back to the roadside for onwards transfer to hospital by ambulance.

“Excellent multiagency working, our thanks to all present who helped out and we hope that the casualties injuries turn out not to be to serious and wish her a speedy recovery.” 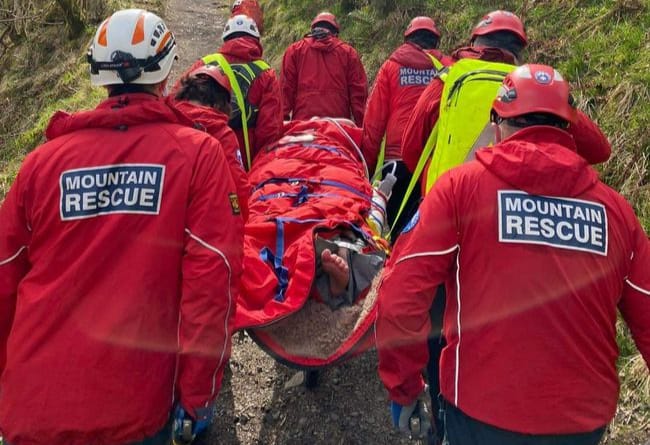 Central Beacons MRT is on call 24 hours a day, 365 days a year, and it covers the central area of the Brecon Beacons - including Pen-y-Fan, the highest point at 886m and the valley of Ystradfellte waterfalls down to the valleys, Cardiff and Newport.

The team, which is based at Merthyr Tydfil, covers a whopping 1437 square km area in total and is one of four rescue teams which covers the Brecon Beacons National Park and South Wales - the others being Brecon MRT, Western Beacons MRT and Longtown MRT.

All of the teams rely on donations from the public or fundraising to keep going as they fund their equipment and fuel costs.

The Central Beacons team requires around £30,000 annually to cover its yearly running costs - on its JustGiving page, the rescue team says that a £65 donation could buy PPE, like a helmet, for a volunteer.