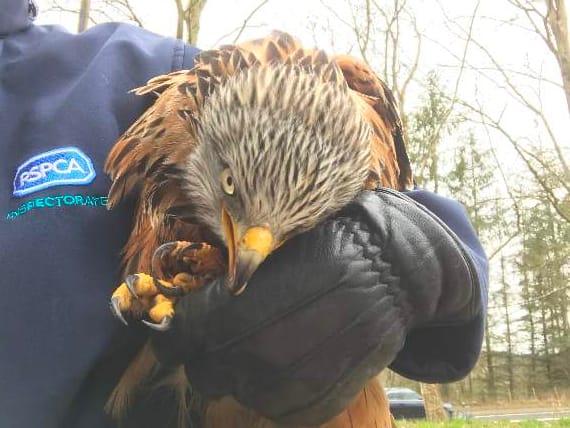 The injured kite with an RSPCA inspector

A RED kite found with two shotgun pellets embedded its body has been rescued by the RSPCA, triggering an appeal for information by the animal charity.

The iconic bird of prey was spotted by a passerby beside the roadside in Builth Wells unable to fly, and she reported her sighting to the RSPCA on Wednesday 17 March.

RSPCA Inspector Suzi Smith said: “I found this poor kite flapping around on an embankment beside the road in Builth Wells.

“I could see his or her right wing was drooping. The injured bird was trying to fly but couldn’t get off the ground.

“I gently contained the kite and took him to Vale Wildlife Hospital in Tewkesbury for assessment.

“X-rays revealed that there were two lead bird pellets inside the kite’s body, one of which was dangerously close to his nervous system.

“The pellets are likely to have been fired from a shotgun.

“The kite is now receiving care at Vale and he is now able to perch and eat well, though the prognosis for this poor bird is still uncertain.

“It is very upsetting to think that this beautiful bird was deliberately targeted and shot; this is likely to be an offence under the Wildlife and Countryside Act 1981.

“Our thanks go to the member of public who spotted the bird and reported the incident to us.

“Anyone with any information about how this kite came to be harmed is urged to call the RSPCA Inspector appeal line on 0300 123 8018 or the police.”