Pupil’s T-shirt design taken to pinnacle of the Beacons 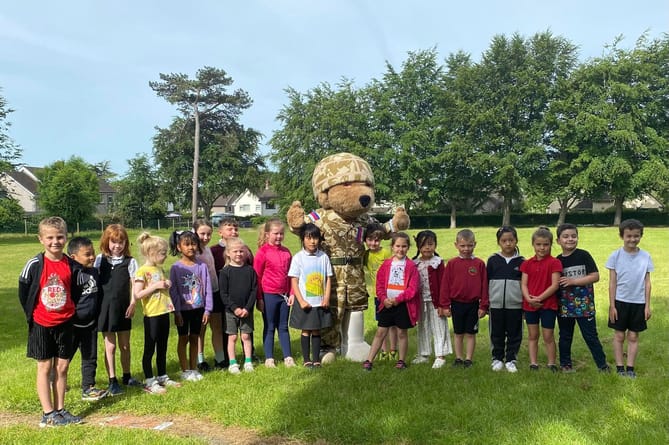 A Brecon school pupil has won a nationwide competition to design a T-shirt - which will now go on to be printed and sold for charity.

Six-year-old Sayami Rai, from Mount Street Nursery and Infant School, was announced as the worthy winner of the competition earlier this month. The competition, which was entered by schools all across Wales, was run by UK Armed Forces & Military Veterans Charity Help for Heroes.

On Thursday, June 16, the ‘Hero Bear’ made a special appearance at the school to present winner Sayami with the very first T-shirt, hot off the production line. The T-shirt displaying Sayami’s design (pictured right) will now go on to be printed and sold via the charity’s online shop. 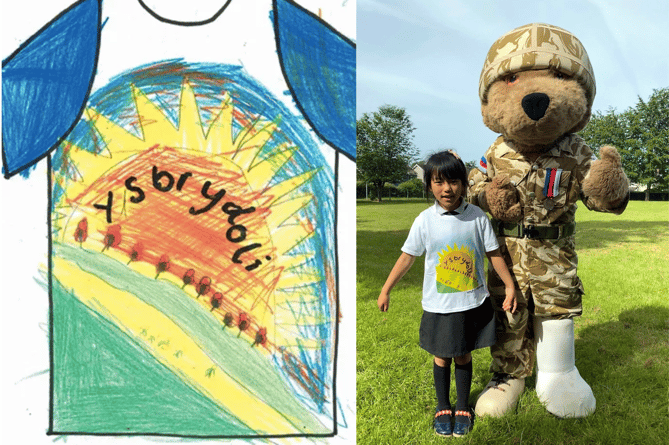 The design competition was judged by former Royal Marine James Cobby. To decide the winner, James was presented with five designs shortlisted from around the country. Sayami’s design caught James’ eye because of her use of bright colours and the happiness it made him feel. The word ‘ysbrydoli’ adorns the T-Shirt - which means ‘inspire’ in Welsh.

The story of how the competition came about begins last year, when a six-strong team of veterans representing Wales won the Help for Heroes national virtual spring games. The team had a great time together, stayed in touch and decided to take on another challenge this year, The team includes West Sussex-based James, who came in to fill the gap left by a last-minute withdrawal and has been regarded as an honorary Welshman ever since.

It was decided that the next challenge they would undertake is to climb Pen y Fan. At 886m, the Brecon Beacons peak is the highest in South Wales.

The design competition was organised so that the veterans could wear the T-shirt when ascending the mountain and would also have a unique souvenir to mark the occasion.

The day before the school visit, on June 15, James, who is a full-time wheelchair user, and the veterans climbed the mountain, with a team of staff and supporters. The team wore Sayami’s T-shirt for the climb - which was aptly named ‘Operation Ysbrydoli’.

One of the organisers, Sport, Activity & Fellowship Lead at Help for Heroes, Nick Vanderpump, said: “There was such a great spirit within the team they decided they wanted to undertake a further challenge together and, with the benefit of an all-terrain wheelchair – and his fabulous support team – James will be there again at the forefront of it. They’re all such great friends now, it’s heart-warming.

“The idea of the climb is not to fundraise, but to demonstrate the value of fellowship and personal goal setting for veterans on their journey of recovery. And this concept is a central tenet of what we do at Help for Heroes.”

Jennie Rumble, Project Manager at Veteran’s Clinical Services at Help for Heroes, added: “Everyone that meets James is inspired by him and what he continues to achieve.

“Sayami’s design was perfect and reflected everything that Help for Heroes is about.”