Two primary schools will not close for at least another year 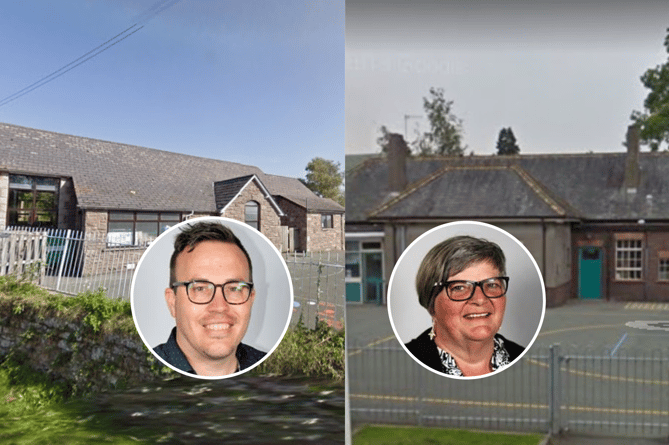 Left is Cllr Matt Beecham with Llanbedr School behind, right is Cllr Deb Edwards with Dolau School behind (PCC and Google StreetView )

A stay of execution of at least a year will be given to two Powys primary schools.

Proposals to close Llanbedr Church in Wales and Llanfihangel Ithon (also known as Dolau) primary school had been agreed by the previous cabinet and were scheduled to close at the end of August 2022.

At a meeting Learning and Skills scrutiny committee on Wednesday, June 29 councillors and lay-people will look at proposals to keep the schools open.

The closure date is now set to be the end of August 2023.

School’s closure delayed after church challenge review did not materialise

‘What about Cradoc?’ Councillor questions Cabinet over primary schools reorganisation

Work to build new school will start in July

This would allow time for new proposals for Dolau which include the possibility of Welsh medium primary school to be looked at.

Cabinet member for Learning, Cllr Peter Roberts said: “The delay in implementation of the proposal will provide an opportunity to identify steps the council could take to mitigate the impact of closure of the school on the community, which could include the transfer of the school building to the community to be utilised for community use.

“It will also provide an opportunity to explore the viability of establishing a Welsh-medium primary school in Dolau.”

Cllr Deb Edwards who represents the area said: “The school is the beating heart of the wonderful community more widely known as Dolau.

“The community have literally climb mountains in their efforts to keep their School.

“I think it’s imperative that we have long term education at this facility, to ensure that future generations are able to learn with n this community.

“I therefore wholehearted support any action which means the continuation of education in this community.’

Later in the meeting the committee will look at the proposal for Llanbedr which will also have the decision to close postponed until the end of August 2023.

This allows time for a wider review which will include other schools in the “cluster” to be looked at.

The report explains that further papers with fresh proposals “outlining the proposed way forward for the Crickhowell catchment” area will be brought back to a future cabinet meeting.

Cllr Matt Beecham who represents the area with his wife Cllr Sarah-Jane Beecham said: “Cllr. Sarah-Jane and I have always been vehemently opposed to the closure of Llanbedr and we welcome the proposed stay of execution pending a review of the Crickhowell catchment area.”

“The community of Llanbedr would be catastrophically impacted if the school was to close.

“The school, along with the church, is very much integrated within the local community and does a lot to support many of the older and more vulnerable members of the Llanbedr community.”

“The community, parents, teachers, and governors are tired by the uncertainty that has hung over the school since the announcement stating the intention to close was made public in February 2021.”

The school closure postponement are expected to be confirmed at a cabinet meeting scheduled for July 5.