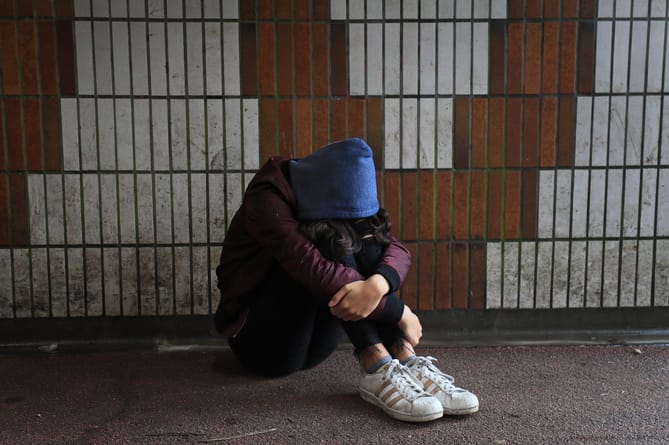 NHS Digital data shows there were between 71 and 77 admissions for self-harm or self-poisoning for children aged nine to 17 at Wye Valley NHS Trust in 2020-21.

And at least 76 admissions were recorded between April and November last year – in the first two-thirds of 2021-22.

Admissions are rounded to the nearest five, and exact numbers are not available when there are fewer than eight cases a year, to protect patient identity.

Across England, at least 20,520 hospital admissions for self-harm or poisoning for youngsters aged nine to 17 were recorded last year.

YoungMinds said many young people find it hard to ask for help until they each a crisis point, and that even before the Covid-19 crisis began they struggled to access support.

Olly Parker, head of external affairs at the charity said: “It is deeply concerning to see that hospital admissions for self-harm admissions have risen to their highest since records began.

“The reasons why young people self-harm are often complex, but we know that traumatic experiences at a young age – like bereavement, bullying or abuse – can have a huge impact.

“The Government must invest in a network of early support hubs across the country so that all young people who are starting to struggle with their mental health are able to get support.”

Of the admissions last year at Wye Valley Trust, between 61 and 67 were for self-poisoning – excluding alcohol – and between 11 and 17 were for self-harm. The NSPCC said the pandemic had been “extremely challenging” for young people – either for those isolated in abusive homes, or those adjusting to a different way of learning.