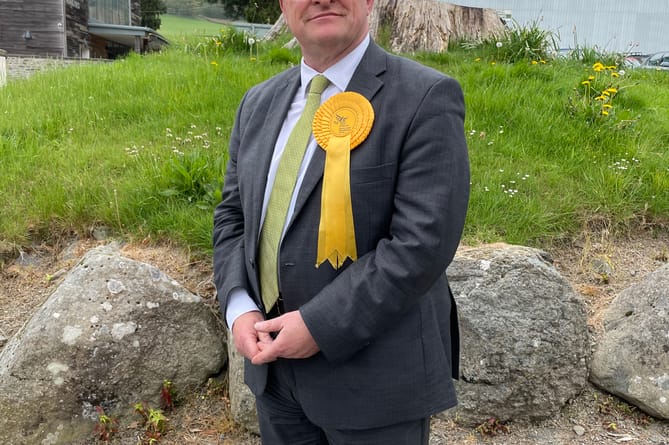 Welsh Liberal Democrat, William Powell, has retained his seat for Talgarth in the 2022 local elections.

The news was met with cheers and applause by fellow candidates as William’s name was announced.

William has thanked the people of Talgarth for going out and voting yesterday,

“It’s very moving to have had a strong endorsement from the people of Talgarth today. It’s quite humbling really to think about the level of commitment that people have shown by turning out in numbers, I’ve got to pay tribute to my opponent, who ran a vigorous campaign. “

Reflecting on his result, William said,

“We’ve got big challenges in county hall. My own party has won some notable victories this time round and it looks as though we are going to have a share of responsibility for the way the council is run in the coming period.”

The Liberal Democrat admitted he was not confident in retaining his seat against Conservative opponent, Peter Weavers,

“I think Peter Weavers is a notable member of the Talgarth community, highly visible, well recognised, well known, strong track record in the community, sporting community, and environment and other matters, and very very active.

“I fought it like it was going to be close, it could have been close, in the end it wasn’t that close. But I think it’s always wise to assume that every vote matters and I’m just grateful for the people of Talgarth and smaller communities who turned out in numbers to show that democracy is alive and well in Talgarth, as it is in the wider county.”

In a successful day for the Liberal Democrats, William commented on the success of his Lib Dem colleagues.

The Lib Dem said: “It’s been a good day for democracy to see the number of intense contests throughout Powys. It’s really good to see alongside Gareth Ratcliffe, who was unopposed in Hay-on-Wye, to see colleagues covering Glasbury ward, gaining Gwernyfed ward, in the form of William Lloyd, Thomas Colbert gaining the Bronllys and Felin-Fach ward, Sian Cox gaining the Llangorse with Bwlch ward, and then going across to the other side of the Black Mountains, in Crickhowell, the duel member ward of Matthew Beecham and Sarah-Jane Beecham. So we’ve got that whole sweep, which includes a notable victory in Talybont also. The depth of our connection with the people in the Black Mountains and wider Beacons area, is something that will be a source of strength.”

William went on to discuss the impact this could have in the future of politics in the area:

“I’d also say that it’s also going to change the dynamics of wider politics in Brecon and Radnorshire in the future, both at parliamentary and Senedd level.

“Last year the Conservatives were triumphant, today I think it is fair to say that they have got cause to reflect, but as Brian Clough used to say, ‘You’re only as good as your last game’ and we need to remember that today and the hard work starts tomorrow.”