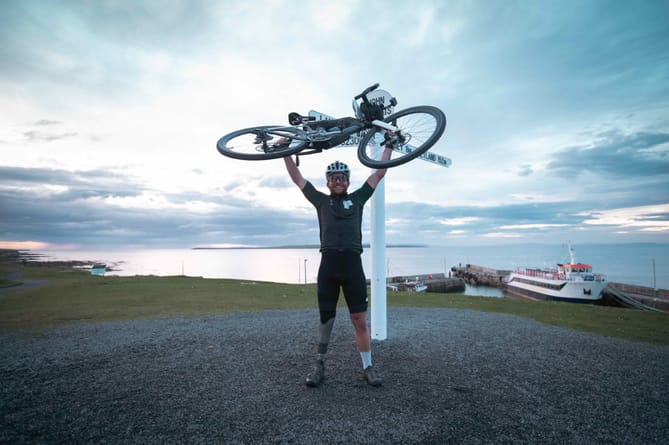 Veteran amputee Stuart Croxford has completed his ​grueling 2000km charity cycle the length of the UK.

Stuart, a graduate of the Infantry Battle School in Brecon, undertook the mammoth trek from Land’s End to John o Groats, to raise funds for Blesma, a charity which provides limbless and injured veterans with lifelong support.

Stuart embarked on the 2000km endurance cycle on May 9th, and has spent the last 10 days cycling up to 20 hours per day, and often sleeping outdoors, through Truro, Exmoor National Park, Quantock Hills, Bristol, Brecon Beacons National Park, and Snowdonia.

“The GB Divide definitely isn’t for the faint of heart. From the relentless weather, steep inclines and washed-out trails, it takes a toll on your body and bike. Now imagine doing that on 4 hours sleep a night,” Stuart said.

“In Wales, I was met with a series of washed out and non-rideable trails, and even slept outside on a mountain in Brecon National Park. The cycle thus has been a huge test of physical and mental endurance. Despite severe exhaustion at times, I kept pushing through, knowing we are raising funds for a fantastic charity”.

Stuart was joined along the way by triple paralympic medallist Jaco van Gass, who cycled 150km with him from the edge of Snowdonia National Park to Manchester.

Stuart joined the British Army in 2007 as an Officer. During his six years serving in the Duke of Lancaster’s Regiment he was deployed on three operational tours in both Afghanistan and Iraq.

In 2012, Stuart suffered severe injuries to his feet when his vehicle hit an improvised explosive device (IED) in Afghanistan, and a subsequent accident in 2014 resulted in his right leg being amputated below the knee.

Determined not to let his injury hold him back he set his sights on qualifying as a BASI Ski Instructor, which he completed 4 months post amputation. This was just one of many major challenges he undertook post injury, pushing the limits of life and endurance.

He went on to complete a full Ironman, the London Marathon, and numerous 100-mile cycling challenges.

Inspired by Stuart’s story, electric vehicle company AVA developed an electric defender in his honour - the Croxford Defender. Designed to take on the toughest of terrains, the vehicle will serve as Stuart’s support vehicle during the challenge. The vehicle itself was built in cooperation with Stuart, with bespoke interiors reflecting his life.

“The AVA Croxford Defender celebrates Stuart’s remarkable story of resilience and positivity. The vehicle is AVA’s tribute to Stuart’s incredible courage and determination in the face of adversity,” AVA founder Norman Crowley said.

This challenge will raise vital funds for Blesma who are dedicated to assisting serving and ex-service men and women who have suffered life-changing limb loss and loss of use of limb. The charity celebrates its 90-year anniversary this year.

Blesma currently supports 3,000 members including limbless and injured veterans and their widows, to lead independent and fulfilling lives, by providing emotional, practical and financial support. Stuart has been a trustee of Blesma since 2020.

Stuart hopes the cycle will raise £50,000 for the charity. Members of the public can donate through JustGiving - https://www.justgiving.com/fundraising/stuartcroxford