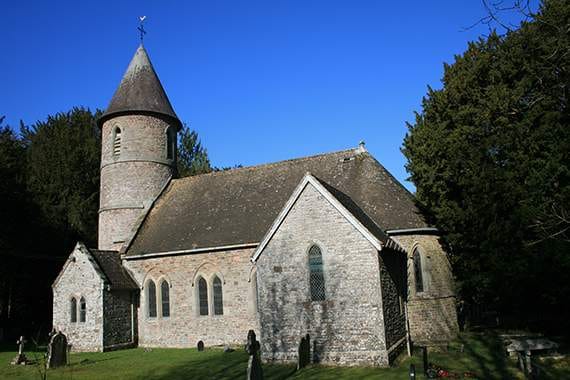 Penpont Church which was raided by thieves armed with power tools

THIEVES armed with heavy power tools smashed through a church door before ransacking the building and making off with priceless Georgian artefacts.

The burglary at Penpont Church, on the A40 between Brecon and Sennybridge, happened between Friday night and the morning of Saturday, May 20.

After smashing through the vestry door inside, the culprits swept through cupboards before finding the safe key and raiding the safe, swiping a silver chalice and plates dating back to 1717.

Robert Macdonald, one of two church wardens, said Church in Wales policy encourages holy buildings to remain unlocked so visitors can come and pray. The vestry, he said, was secured with two locks.

"We thought it was secure," said Mr Macdonald. "But the thieves seem to have come prepared with heavy power tools and they have wrecked the door, using heavy-powered chisels to shatter the wood all around the locks.

"They also removed the donations box in the wall by the main church door.

"This same box was burgled only about a year ago and those earlier thieves smashed the wall all around the box, but this time it has been removed incredibly neatly by someone who knew what they were doing."

It was only recently that Neville Williams, organist and church treasurer, completed repairs to the wall and finished cementing around the box. Deed boxes were also pilfered from the safe.

"It was a thorough and systematic attack on the church and also incredibly mean-minded," said Mr Macdonald.

"It will be hard for them to sell the silverware, which is well-recorded but Lord alone knows why they should have taken all our vestments and altar cloths."

The timing of the break-in couldn’t be worse, with a Eucharist service being held at the church this weekend.

"We do not know what to do," he said. "We have nothing left to celebrate Communion with. They have gone off with everything. Members of the congregation are deeply upset. They have removed the church’s history as well as all its belongings."

A photographer discovered the ransacking after taking photos in the churchyard early Saturday morning. Helen Gichard, the church secretary, said she heard nothing from her lodge next to the church.

Penpont is a historic church. It is especially notable for its organ, which came originally from the Chapel Royal in Brighton Pavilion and was originally acquired by the Prince Regent.

Along with other properties acquired by the Prince Regent, it was sold by Queen Victoria, and brought to Wales by the Garnons Williams family of Abercamlais.

During the burglary, the thieves found the keys to the organ and unlocked it, but left it undamaged.They also left intact various wall plaques commemorating local veterans who died in the First and Second World Wars.

Penpont Church is noted for its historic yew trees. The ancient yew at the East end of the church is said to be 2,000 years old. "The yew tree is said to protect the church," Mr Macdonald told the B&R.

"I expect it will assert its power on the burglars and I’ve no doubt they will come to a bad end, and deservedly so."