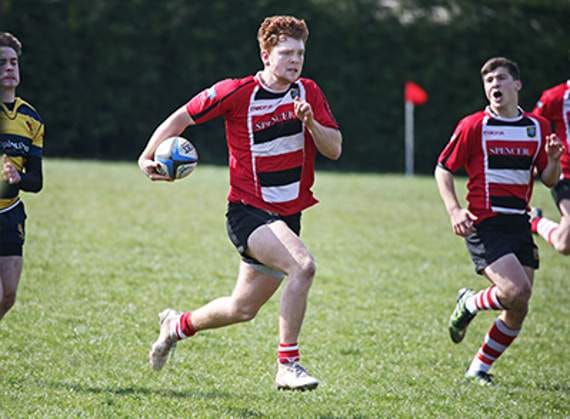 RETAINING their focus after the disappointment of a cup loss in the final moment of the game against Merthyr the previous week was never going to be an easy task for Brecon Youth.

It wasn’t just the narrow defeat that posed questions it was the fact that with a seven-point lead going into the last play they lost possession and the opposition clinically levelled the scores. With the score tied at 17 points each Merthyr progressed in the Cup through the away team rule. Still with an opportunity to win the league, it was essential they bounced back immediately when they took the field against Aberdare Youth in their penultimate league match.

From the kick-off Brecon looked to play the expansive game which has been the hallmark of their play for a number of seasons. They were prepared to take risks which did not always prove to be the best course of action but they were not prepared to compromise.

Their play brought early rewards. After a period of almost constant pressure they created space out wide and impressive hooker Ben Kenchington ran a great line to break through for an excellent try.

Kenchington followed up his early success with another great run after Kyran Dillon set up the position with a lovely loop and weaving break. With space created, centre Charlie East, broke through with a powerful run that propelled him to a try under the posts. Ryan Williams converted and after 10 minutes Brecon had a 12 point lead.

That was further extended when centre Ollie Lewis sliced through off a short pass on half way and showed great pace to leave any cover floundering.

Staring a possible heavy defeat in the face, Aberdare responded. They gained territory deep in the Brecon half and through an effective driving maul almost recorded their first score. Brecon then quickly turned defence into attack.

The second half started with Aberdare looking far more threatening. Their No?8 made a series of impressive runs and Brecon had to work hard to keep him in check. Finally he got what he deserved as be barrelled over for a try. Aberdare followed this up quickly when they made the most of a Brecon error.

An innocuous looking kick caused all sorts of problems as the Brecon defence failed to deal with the rolling ball. The Aberdare wing pounced and raced away for a try. The danger of a defeat was addressed when Matthew Williams made a tackle and ripped the ball off his opponent. Brecon were quickly back on the attack and centre East showed great power to break through the Aberdare defence and score under the posts. Ryan Williams converted.

Back in the ascendancy normal service was resumed. Scrum half Dan Hiscocks put in a kick ahead which he chased down regathered and burst away to score a great individual try. As the game moved into the final phase Aberdare had the last word as they gained a deserved third try which was converted.

The young Brecon team now look forward to their final league match against Cardiff Quins with the hope that a win will be enough to see them crowned as league winners.