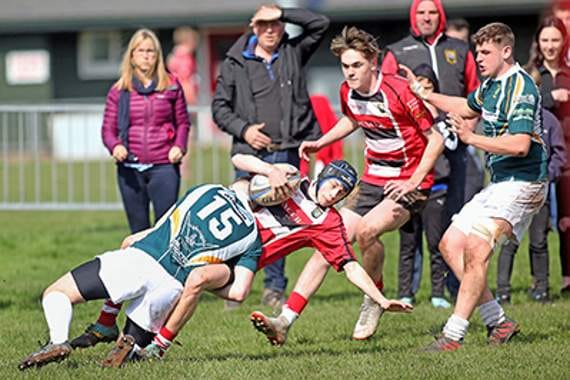 Brecon wing Joe McDean is thwarted by the Merthyr full back ()

A game played in perfect conditions in front of a large crowd proved to be highly entertaining, both sides realising it was a pivotal point in their season

Merthyr took complete control of the first half and many would argue unlucky to be only 10 pts to 5 pts up at half time, Brecon forwards struggled at the break down, Merthyr back row winning the battle at the ruck area, Brecon’s only consolation in the first half was a try scored by Kyran Dillon and with Josh Pritchard , Josh Hamilton and James Roberts carrying ball with great effect as the first half drew to a close there was still a feeling Brecon could turn things around in the second half.

The harsh words at half time focussed the minds of the home side who used the ball more wisely and took their opportunities, Olly Lewis crashed over for a try in midfield, Ryan Williams adding the extras. Another try soon followed when Josh Hamilton was rewarded for another one of his trade mark bullocking charges

Brecon lead 17 pts to 12 pts with ten minutes remaining. Merthyr got themselves into Brecon’s territory but the home side defended manfully and turned the ball over on numerous occasions but failed to clear their lines which was to prove costly.

Merthyr scored with the last play out wide leaving a difficult kick which was struck with a plomb shattering Brecon’s dream of progressing in the Cup.

n Two league fixtures remain for Brecon Youth this season playing Aberdare at home (April 13) and Cardiff Quins away (April 20), there is still plenty to play for.