Bulls in the pink with victory over promoted Nantyffyllon 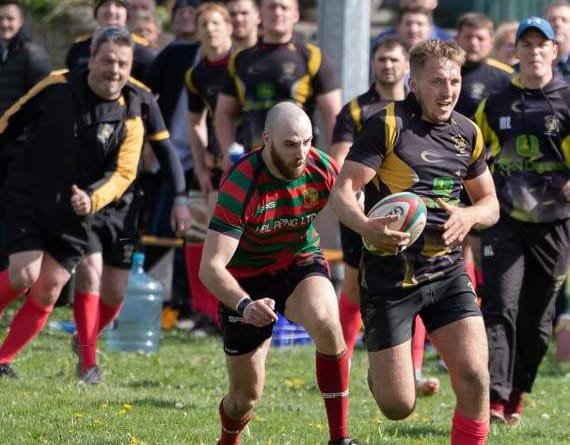 With Builth Wells’ opponents Nantyffyllon having secured promotion the week before, it seemed likely this match would be a dead rubber.

But in fact it was far from it, with the Bulls keen to do well in their final match of the season and Nantyffyllon wanting to show why they had been promoted.

The game started at a fast pace with the big crowd enjoying the sunshine and providing a great atmosphere.

Captain Rhys Davies struck first scoring from a great team try that began in the Bulls’ half. The conversion was missed but great defence from the home side meant the half-time score stayed at 5-0 to the Bulls.

After the restart Bulls full back Steff Towns began to be an attacking threat from almost everywhere on the pitch. The just-turned-18-year-old got his rewards scoring a fantastic try in the corner, trampling through two defenders’ desperate attempts to tackle him. Again the conversion was missed, making the score 10-0 to the Bulls. With 10 minutes to go, the Bulls pack started on a very aggressive phase, with Ted Davies prop having a strong impact from bench.

Aiden Luxton the other prop was also having a great game.

Second row Lucas Evans had some great charges and carries and was always offering offloads, one of which eventually led to the Bulls’ last try.

No 8 Ash Mills was on hand to take a great pass from wing Rhys Davies who found room on blindside.

Openside flanker luke Jones took a great pass from wing ... he was able to free flanker Lewis Bowen who made a charge for the line but was held up. He managed to offload to No 2 Ben Pugh to score in the corner. For a third time the conversion was missed but the Bulls had earned a hard-fought win. It meant Bulls finished third in the WRU National League Division 2 Wales West Central and with nine youth players playing the future looks good for the Bulls and next season’s promotion push.

The Bulls wore pink socks during the match to help raise money for Cancer Research UK. Also all the gate receipts were donated to the charity.