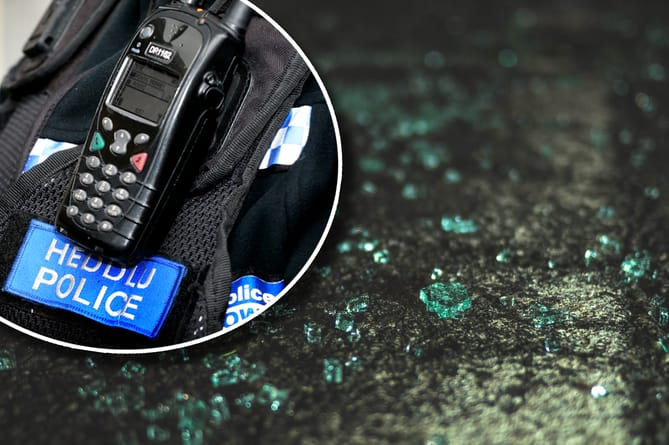 (A police radio inset over broken glass from a car window )

Research has revealed that out of the whole of England and Wales, Dyfed-Powys is the place where people are least likely to have their cars stolen.

The study, conducted by  A-Plan Insurance, was carried out by assessing Home Office data of vehicle thefts in each Police Force Area and determining the rate according to the number of thefts per household.

There were 623 vehicle thefts across Dyfed-Powys 2021. This means 1.2 cars were stolen per thousand households.

On the opposite end of the spectrum, with 100,185 cars stolen in London in 2021, England’s capital had 11.1. vehicle thefts per thousand households. This puts it first for the area where drivers are most likely to be the victims of vehicle theft.

The research also analysed data from 2020, to determine whether vehicle thefts have increased or decreased in each Police Force Area since last year, finding that although London is still the worst place for vehicle theft, the crime rate is improving. Compared to 2020, car thefts in the capital are down by nine per cent, however, it’s a different story in the West Midlands, with 12 per cent more vehicles stolen in 2021.

Commenting on the findings, a spokesperson for  A-Plan Insurance said: “Theft is one of the main concerns for drivers, especially if you live in an area like London or the West Midlands, where there’s a higher risk of your vehicle being stolen than there is in somewhere like Dyfed-Powys and Cumbria.

“It’s interesting to see that some of the places with the highest vehicle crime rates are improving, though, and drivers can rest easier by making sure they have adequate insurance cover for their vehicles to protect them from theft and other risks.”