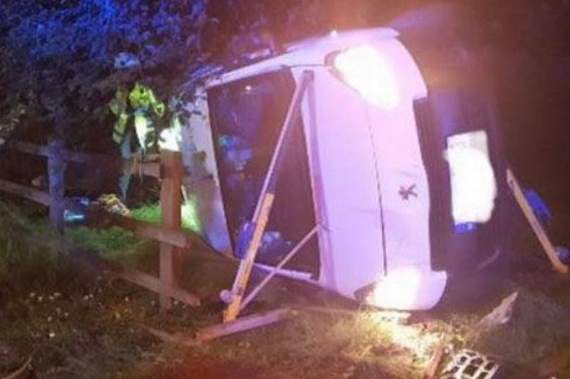 THREE men who targeted trade vans across rural Wales in a crime spree which ended in a high-speed chase have been jailed.

Swansea Crown Court heard how Michael, Patrick and Shamus McDonagh travelled to west Wales in June 2018 and broke into trade vans in Tregaron and Llanrhystud, as well as vans in Felinfach near Brecon during a series of night-long raids, stealing thousands of pounds worth of tools.

The gang, who were all in their teens at the time of the offences, drove to rural Wales and were equipped with gloves hats and a collection of false number plates.

As the gang fled from police they threw objects from their van at the pursuing officers – one of which became embedded in the bonnet of the chasing police car.

Glider crashes in field near Talgarth

Around 60,000 litres of water used to extinguish morning barn blaze

Woman in hospital after collision with Brecon churchyard

Hannah George, prosecuting, told the court that the McDonaghs were disturbed during a number of the thefts and the victims were able to give police details of the licence plate of the getaway van but the number plates were different on each occasion.

However officers were able to identify the Peugeot van in question and it was subsequently located near Aberystwyth.

A high-speed chase ensued along the A44 and the A470 through mid Wales, with the van hitting speeds of 100mph, driving on the wrong side of the road and going the wrong way around roundabouts.

The court was told that during the chase, tools and batteries were thrown from the van towards the chasing police car, with one battery becoming lodged in the bonnet of the police car.

The driver of the van lost control when approaching Newtown, hitting a kerb and flipping the vehicle on its side.

The three defendants were found in the two-seater van – Michael McDonagh was in the back – and had to be removed from the wreck.

Also inside the vehicle were most of the stolen tools along with a number of registration plates.

The court heard both Shamus and Patrick McDonagh’s DNA was subsequently found on the steering wheel of the van but it was not possible to say which one had been driving during the pursuit and none of the defendants volunteered that information. Shamus McDonagh’s DNA was also found on two of the false plates.

Michael McDonagh was taken to Bronglais Hospital in Aberystwyth and Patrick McDonagh to the Royal Shrewsbury Hospital to be treated for injuries sustained in the crash. The majority of the stolen tools were eventually able to be returned to their rightful owners.

He said much, though not all, of the delay in the matter coming to court had been caused by the defendants and he noted that in the three years since the Welsh offences each had been convicted of other offences and had served prison sentences.