Car park plans lodged due to tourist boom at waterfall 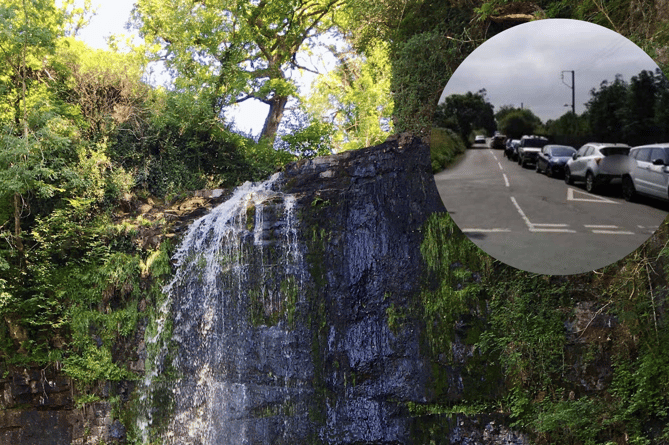 Henrhyd Falls. Inset shows congestion due to car parking on the side of road leading to the beauty spot. (. )

PLANS for an overflow car park, which has already been created, near a tourist attraction in the very southern tip of Powys has been lodged with county planners.

At 90 feet above sea level Henrhyd Falls is the highest waterfall in South Wales and is located on National Trust land.

The National Trust have submitted the retrospective planning application for an overflow car park near Henrhyd Falls, Coelbren near Ystradgynlais.

Due to visitors parking on the side of the roads leading to the waterfall, building the car park is seen as a solution to stopping the congestion.

“The level of visitor numbers is such that the existing car park cannot always accommodate demand and overspill parking regularly occurs, causing congestion on surrounding roads and nuisance to nearby residents and are becoming frequently impassable.”

“The National Trust has identified an area where an overflow car park can be located, opposite the junction of the C0194 and C0193.

“Due to the urgent need to address the congestion caused by overspill parking the car park was constructed in the summer of 2021.

“This planning application seeks retrospective permission for the works.”

They add that the overflow provides an extra 20 parking spaces – and that this equates to freeing up 120metres of road from inconsiderate car parking.

The statement adds that Powys County Council have said that they intend introducing further traffic restrictions in the area.

Prohibition of waiting at any time are intended for sections of three roads at Coelbren, the C C0193, C0194 and C0198.

The reason behind this proposal say Powys is to: “prevent inconsiderate parking at the areas where vehicles are obstructing the public highway significantly.”

They add that emergency services vehicles have problems navigating the area.

A consultation on the proposal was held between July 21 and August 13 last year, but no decision has been taken to implement these restrictions.

Planners have until June 8 to decide.