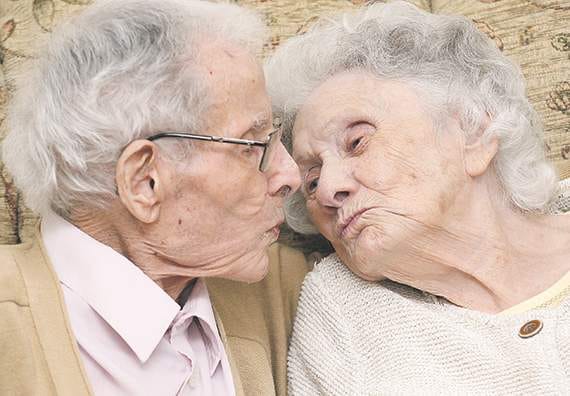 A COUPLE have celebrated their 80th wedding anniversary at a nursing home near Crickhowell – having recently been reunited after circumstances led to them spending time apart.

Ken and Margaret Harris married on June 6 1937 and marked the occasion last week at Oaklands Residential Home in Llangynidr with family and staff. The couple had been forced to live separately after Margaret was admitted to Oaklands for her care needs and Ken continued to live at home in south Wales.

It was only after Ken recently had a spell in hospital that the couple were brought back together when he too was admitted to the care home.

Ken and Margaret, who met in their 20s, moved to India soon after their wedding and then on to Burma where Ken served with the South Wales Borderers during the Second World War.

Ken and Margaret then settled in Llanhilleth in south Wales where Ken worked as a master butcher. After Margaret was admitted to Oaklands, Ken was taken to visit her regularly by his son Alan and daughter-in-law Pat, who returned home to south Wales from living in Torquay to support them.

Ken is 102 and Margaret is 99. Their family say Ken puts his longevity down to having always worked hard.

A statement from the family said: “Throughout his 90s, Ken nursed his wife with dementia and they sadly were separated when Margaret was fortunate to be looked after at wonderful Oaklands. Some six weeks ago Ken was hospitalised following a fall and it looked likely that they would never see one another again. But mercifully thanks to excellent networking between the family social services team and Oaklands manager Julie Cashell they have been brought back together in time to celebrate their 80th wedding anniversary, making sure this love story has a happy ending.

“Pat and Alan and family would like to thank, from the bottom of their hearts, everyone who has made this a happy ever after ending for Ken and Margaret.”