Married couple step down after decades of service to chapel 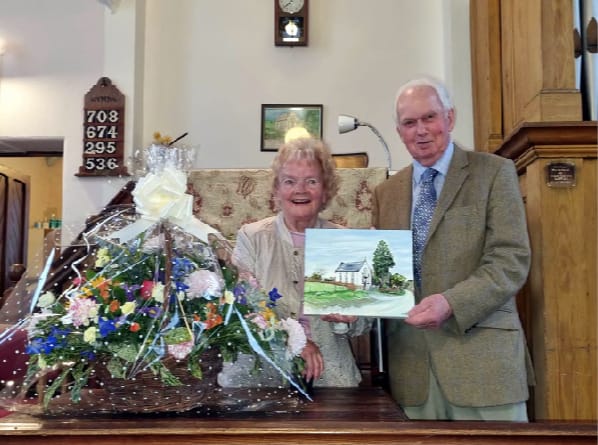 A dedicated couple have announced their retirement from their roles at a Radnorshire chapel.

Megan and Ernie Beaumont have stepped down from their posts of chapel secretary and treasurer, respectively, at Providence Chapel, Howey.

Mrs Beaumont had served as chapel secretary for the past 37 years, whilst Ernie had been chapel treasurer for over 40 years.

Howard Nixon is now the chapel treasurer, whilst Ann Mitson is the secretary.

Mr and Mrs Beaumont’s service and achievements were recognised at a special Easter celebration service on April 17.

The couple were presented with a flower arrangement, as well as a beautiful painting of the chapel which indicated the talent of local artist, Lucy Burden, who was thanked for her kind gesture.

The couple were thanked for their many years of faithful service to the chapel, and they assured those present that they would continue to attend and help the chapel for as long as they were able to.

The service itself was taken by Miss Christine Humphreys, who provided the congregation with helpful thoughts on the true meaning of Easter.

Readings were given by Howard Nixon, Michael Gough, Lydia Brandreth and John Mitson.

Poems were provided by Jo Davies, Rachel Williams and Bob Atkins, and solos were given by Griff, Cerys, Kelsey and Angharad.

The children in the singing group were Lily, Maisie, Lara, Edie, Flo and Kelsey. Accompaniment was provided by Ann Mitson. The Chapel was beautifully decorated by by Hayley Simcock. A vote of thanks was given by Rachel Williams.

A spokesperson from the chapel said: “It as great to see so many friends, old and new, gathered in the chapel once again, to celebrate the death and resurrection of our Saviour.”