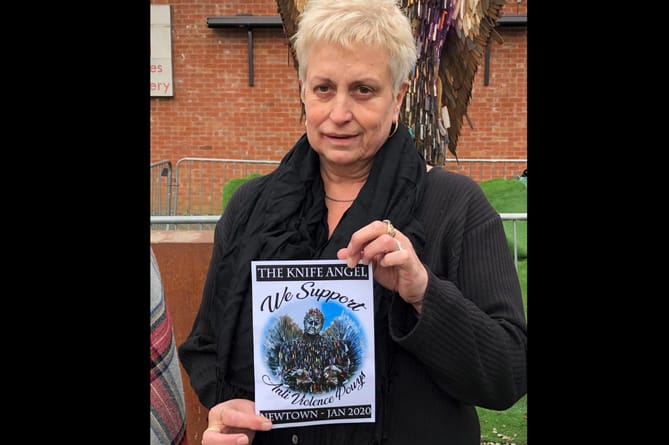 An anti-poverty campaigner in Newtown has thrown her support behind protests held across the country to highlight the cost-of-living crisis.

Earlier this month a demonstration was held in Cardiff over the rising costs of living and the soaring price of energy and other bills.

The protest, organised by The People’s Assembly, was one of dozens held in locations across the UK, including outside 10 Downing Street highlighting the impact a combination of rising fuel and food prices, inflation and low pay is having on millions of people.

Last week, Joy Jones found out that she will be returned uncontested in this year’s Powys County Council’s elections for the Newtown East ward.

Unencumbered by the need to campaign in the forthcoming election, Joy is highlighting that many people all across Powys are struggling to pay their bills and manage the costs of living.

During the last council term, Ms Jones was the Anti-Poverty champion for Powys a role she relishes and hopes to continue in when the council work re-starts after the election results are finalised on May 6.

She said: “This is a protest I agree with. It’s time to make a stand against these ever-increasing prices while companies make huge profits.

“Speaking to local people over the past few days I have been hearing how they hadn’t dared to put the heating on all winter.

“Their food was one meal a day and that might only be a sandwich.

“People are going to bed at 8pm to 8.30pm because they can’t put the heating on.

“This is not how our society should live.”

“There is so much hidden poverty in Powys.

“People are working hard often two or three jobs just to put food on the table or heat their homes not for luxury holidays or designer clothes but for the essentials to stay alive.

“People are often proud and try not to show the difficulties they are in until it totally consumes them and affects their physical health, mental health and wellbeing.

“Sadly, if this state of affairs continues we will see people losing their home and turn out with nowhere to go.

“Foodbanks will be put under immense pressure as donations dry up.”

She added that a sad reality is that when people end up in debt, marriages fail, and domestic abuse can happen and that something needs to be done by government before next October when a second rise in energy bills is expected.

“They need to listen and work for the people of this country and make a stand to the world in tackling poverty,” she added.

The People’s Assembly say they are not linked to a political party, and that the committed to open non-sectarian working and dedicated to supplementing, rather than supplanting, trade union, student, pensioner, and community opposition to austerity measures.