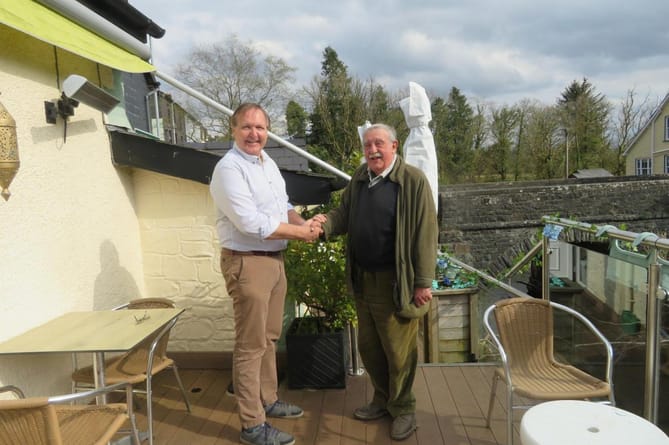 Colonel Tim Van Rees has handed over the reins as an Independent candidate for Powys County Council after 41 years of service.

Colonel Van Rees returned to Council no fewer than ten times and has served both Powys County Council and the town council of Llanwrtyd Wells, while also supporting the parish councils of Llangammarch and Trefllys.

Over the years he has contributed and overseen many projects such as the provision of the Community hall in Tirabad, the refurbishment of the Reading Room in Beulah, the Community Hall in Garth,the refurbishment of Alexandra Hall in Llangammarch and the successful transfer of Abergwesyn Hall to the Town Council of Llanwrtyd who continue to maintain it and he has given his support for the grants obtained for the now thriving Arts and Heritage Centre.

A well-known figure across Powys, the colonel has seen the building of the new Ysgol Dolafon School and has served as one of their Governors for many years and has campaigned tirelessly to maintain primary school provision both in Llanwrtyd and Garth.

He has ensured over the years that any housing development was appropriate for the town and was proactive in the Tai Cae Mawr development.

He has fought for vital community services within the area, fighting to retain the post office, the pharmacy, the ATM machine and banking services. He has also being involved in the flood defence system, as well as being a trustee of the War memorial Institute and maintaining its presence and importance to the Town.

He has fought hard with the town council over many years to have appropriate traffic control measures in Llanwrtyd Wells.

On a wider level, the colonel has been pleased to support the Mid Wales and West Fire Service and his local services, who, together with community support , pioneered the ‘First Responder’ vehicles.

During his time on the council, he has sat on many committees such as the Reserved Forces Association and has chaired many organisations, which included the Breconshire University Scholarship

He concluded military service as colonel at Youth Music Headquarters Landforces UK and has been proactive with young people in Powys supporting them to develop their musical talents.

However, after over 40 years service to the county and to the local community, he says it is time to hand over the reins.

Colonel Van Rees said: “We have a long standing tradition in Llanwrtyd of returning independent candidates in local elections.

“There is, and always has been, in this area, a distrust of party politics in Powys.

“We have a long preferred to have independent representation so as not to be influenced by the ‘party political’ machine and to have a representative to speak forcibly on behalf of local interests and not be subject to any overriding extraneous control.

“May I conclude, therefore, by thanking you as community for your outstanding support over the last 41 years which have enabled much to be achieved.”